This year will see the 25th running of the Kangaroo Hoppet cross country ski marathon at Falls Creek on the fourth Saturday in August.

Over 1,200 skiers from all around the world are expected to take part in the 42km main event together with the associated 21km and 7km shorter events on August 22nd.

As we reach the start of autumn, it is now 25 weeks until the 25th Kangaroo Hoppet.

“25 years is a pretty remarkable achievement” says Hoppet Race Director Allan Marsland, “and we are planning for an increased level of participation with past skiers returning for the occasion and bringing family and friends with them”.

“As part of the lead up to the event we plan to publish 25 profiles of a range of people involved with the events, not only as participants but also as volunteers. By highlighting the achievements of these people we hope to inspire others to make the decision to come along and be part of the cross country skiing activity at Falls Creek not just at Hoppet time but throughout the season as well”. 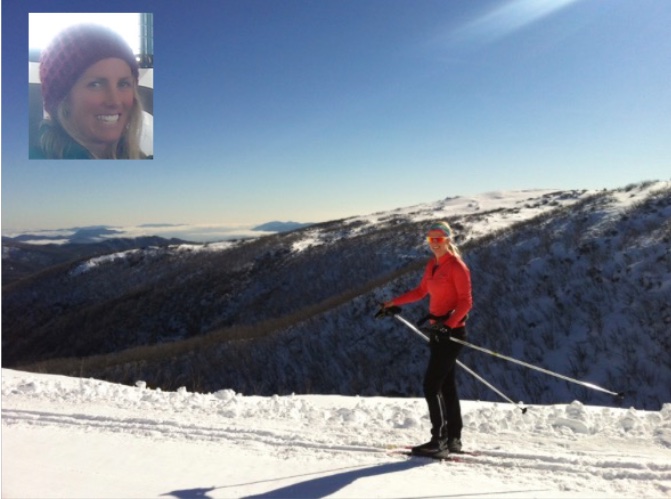 I completed my first 21km Birkebeiner race seven years ago, after a couple of seasons of cross-country skiing.  Before that I was into snowboarding!

Cross-country skiing got me out exploring, and it was something I enjoyed doing by myself or with friends.  I also enjoyed the fitness aspect.  I was getting a full body workout and it made me feel really good, especially when I would go skiing early in the morning as the sun was coming up!

I loved being a part of the whole Hoppet event.  Back then, I saw people competing in the 42km Kangaroo Hoppet and thought it was beyond me, but I kept skiing and improving my Birkie results, and a few years later I entered the 42km  for the first time.  I just wanted to make it around the course! That was 2011 when it was held up on Frying Pan.  I had a big crash coming off the summit and ended up with some blood on my face.  I wasn’t hurt, but I felt a bit emotional after finishing something so hard and managing to scrape inside the top ten women!

Now I’m involved with the Birkebeiner Nordic Ski Club.  I enjoy the community aspect to skiing and getting involved in club races and events, like Ski de Femme.

I have not experienced anything quite like the vibe you get at the Hoppet, with everyone from elite international skiers, our own Olympians, young families and everyone in between.

This entry was posted in Uncategorized. Bookmark the permalink.