Summary — Victorious is Lauri Jortikka (Vic) who virtually led from the gun. In 17th place was the first woman Robyn Rodd (Vic). A total of 83 skiers finished the course. The course was 25 km long skied in the classical style with skiers carrying a 5 kg pack that represented the crown prince. The course started on the east side of the Dam Wall and went via Watchbed Creek to Fitzgeralds Hut, Edmondson’s Hut, Heathy Spur, and back to the Dam Wall to finish in the Nordic Bowl.

The Birkebeiner Story incl. information about the mother (Inga) of Prince Hakon

Summary — A high-stakes adventure set in the
middle Ages, in the midst of a 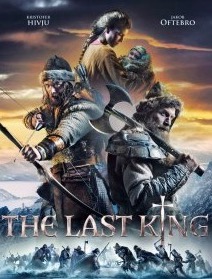 great civil war. When a monarch is murdered, two of his loyal soldiers must escape with the infant heir to the throne (Prince Hakon). With half the kingdom looking to kill the young Prince, the brave warriors risk life and limb to shepherd him across treacherous snowy mountains to claim his rightful place on the throne.

The 2016 produced movie is 100 minutes long with English subtitles and costs ~$25.00 + postage from <http://www.amazon.com.au>. Note be aware of the DVD’s Region code so it will play on your DVD Player: Australia is Region 4, the USA is Region 1.

An interview conducted on the origins of the Kangaroo Hoppet following Hoppet #20 in 2010 — Interviewer Paul Gray and interviewees Allan Marsland & Paul L’Huillier (10 minutes).

A Map of the Crossing
(Mountain Creek to Hotham Heights)

The Diamond Straight Jacket – what is that? (pdf)

Summary — According to cross country skiing folklore in Victoria you have to be crazy to attempt some of the long-distance journeys across the southern alps and high plains. You need, they say, to be put in a straitjacket.

Summary — The idea for a winter crossing from Mountain Creek to Mt Hotham first took shape in 1964 between a group of keen skiers from the Wangaratta Ski Club. (Article supplied with thanks by Chris & Ben Derrick – August 2019).

Summary — This crossing was made by three Wangaratta Ski Club members — Robin Gibb, John Kerby & Bill Woods. They completed the crossing in 12 hours on classical skis.

Summary — Two National XC Ski Team members completed The Crossing in a time of 8 hrs 30 min. Phillip was the first Birkbeiner NSC member to do so and Mark was Wangaratta Ski Club’s fifth member (Danny Flynn in 1975 was the first) to complete the journey.

Summary — On 6th September 1985, David Hislop (NSW) shattered the Perisher Valley to Kiandra crossing record held for 21 years by Finnish skier Robbie Kilpinen. Kilpinen’s time for the 80 km journey, set in August 1964, was 8 hours 11 minutes. Hislop skiing solo over some of the Australian’s toughest and wildest terrain completed the distance in 6 hours 18 minutes. What made the achievement even more remarkable was the fact that he had attempted the trip two days earlier, only to get lost after nine hours of skiing.

Summary — covers the equipment and machinery used, who operated and developed it, and the resorts where it was used.

Summary— some historical facts relating to the name of Telemark Nordic Ski Club and its activities since its formation in 1972. Telemark was the first dedicated cross country ski club in Australia formed by Bob & Norma Cranage.

A Brief History of Cross Country Skiing in Australia

Summary — This is a short account of the recent history of competitive ski skating. It has been drawn from the coaches and skiers who witnessed the “skating revolution” first hand.

Summary — For decades the skating techniques lay forgotten or ignored by racers, but in the 1970s they were reintroduced by Pauli Siitonen (FIN), whose contribution to popular racing (citizen/tour racing) and to cross country skiing, in general, cannot be overestimated. He popularized the Sitonen Step (later to be called the Marathon Skate). In the 1980s Bill Koch (USA) introduced it to the World Cup and in 1982 won the overall World Cup using primary skating techniques.

Summary — Few sports have changed as rapidly and dramatically as did cross-country skiing in the 1980s. For more than a hundred years cross-country competitors had universally raced with the ancient diagonal stride, alternately kicking and gliding. The sport was engulfed in controversy over the new technique. Read on…

Australian Mountains —Articles on the mountains of south-eastern Australia.

Summary — The website is comprehensive and includes the history of huts & buildings (incl ski lodges), historical articles (1. Timber Tramlines, 2. The Re-Discovery of Moroka Gorge, 3. Snowy Mountains Main Range Development, Walking Notes and Main Articles. The site is a work in progress and maintained by David Sisson. 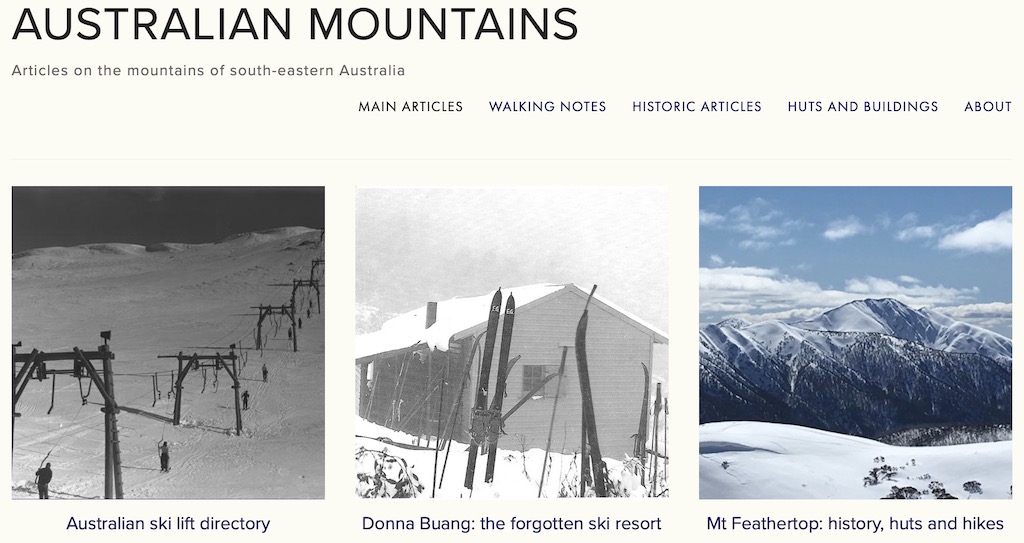 Summary — Late afternoon on 21 August 1936 four ski tourers stumbled into Cope Hut. The scarcity of firewood was totally unexpected as it was tradition that hut users ensured ample supplies were always left for those that followed. The lack of firewood was attributed to a “hobo” found in the hut when the group arrived.

A Man of the Mountains — Martin Romuld

Summary — “I think that credit for much of the background work in the initial development of Falls Creek should be given to Martin Romuldfor his early encouragement and appreciation of the beauty of the high country and of skiing!” Fred Vines, member of Bogong Ski Club in the 1940’s.

Skiing as a Sport was Born in Australia?

Summary — During the severe winter of 1861, skiing as a sport came to life in the gold-mining township of Kiandra, New South Wales. Historians give credit to Norwegian miners for making our first ski, called “snow-shoes” or “snow- skates” which were used as a means of conveyance during the winter of 1860. But it was not until 1861 that a record of skiing as a sport was published in the local newspapers.

When Skiing found its way to Australia

Summary —”Kiandra is a rather dreary place in the winter, but yet the people are not without their amusement. The hea­ ven-pointing snow-clad mountains afford them some pleasure. Scores of young people are frequently engaged climbing the lofty summits – with snowshoes and then sliding down with a volancy that would do credit to some of our railway trains” — (From The Sydney Morning Herald, 10 August 1861)

9. The Origins of Skiing

Use of skis throughout history — Transport, Hunting & Warfare

Summary — Who was the first person to don skis in Australia? When – 1861 is a popular starting date. Aussie or a Norwegian. Skiing in Norway dates back at least to the stone age (8 pages).

1. Video History of Skiing in Australia

Summary— The snowfields of the Australian Alps are larger than those in Switzerland and provide winter holidays for many Australians. Others work and live with their families above the snow line, where life is much as it is in other towns but with an added excitement.

Summary — Australia has a rich and exciting skiing history and is one of the oldest skiing nations on the planet. Follow the journey from 1861 until today, you will be amazed.

Summary — A group of tourists learning to ski at Mt. Buffalo. After arriving by bus, an instructor arrives and the lesson commences. A group of novice skiers follows their instructor in some cross country and downhill skiing