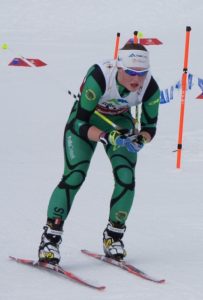 Casey Wright, from Launching Place Victoria and a Birkebeiner, has given Australia its first cause for celebration at the Sapporo 2017 Asian Winter Games, finishing third in the women’s 1.4 km cross country skiing sprint.

Wright was consistently strong across the four rounds of competition and maintained her stamina throughout the day to claim Australia’s best result at the Games thus far.

The 22-year-old began her day the best possible way, overtaking the athlete before her in qualification for a 15 second gain. The gusty 3:52.84 qualifying time was five seconds faster than the next best competitor and saw her qualify fastest for the round of 16.

Starting in the first of four quarter finals Wright powered home to finish second and progress to the first semi-final in which she fought back in the end stages to take the win and qualify for the final.

In the decider the Alaska based student dug deep to secure the third place finish.

It was a significant moment in the career of the emerging athlete who has aspirations to one day represent Australia at the Olympic Winter Games.

“I’m skiing like a totally different athlete than what I have in past seasons,” Wright said.

“I’m in new territory and testing the waters. Totally a confidence boost and I’m stoked.

“Competing against an unknown field that I haven’t raced against before and to experience these new challenges and see where I sit against the world at the moment is exciting.”

As guests of the Asian Winter Games, Oceania nations Australia and New Zealand do not receive medals, but that couldn’t wipe the smile from Wright’s face.

“I came here to race and that’s what I did. A shiny thing at the end is just an added bonus. For me, I don’t need that. It’s more about the self-satisfaction and knowing I’ve done my best and that’s what I take home from every race.”

In the men’s event Jackson Bursill narrowly missed progressing beyond qualification after he finished 17th in the first round.

This entry was posted in Information, Race Info & Results. Bookmark the permalink.